India’s first female comic book superhero, Priya, is gearing up to dive into a brand-new riveting adventure. The fourth edition of India’s first pioneering comic book series, ‘Priya’s Mask’ this time tackles the unprecedented global COVID-19 pandemic that has challenged everyone in India and around the world. The comic book and film will be released worldwide on December 2, 2020 on multiple platforms. 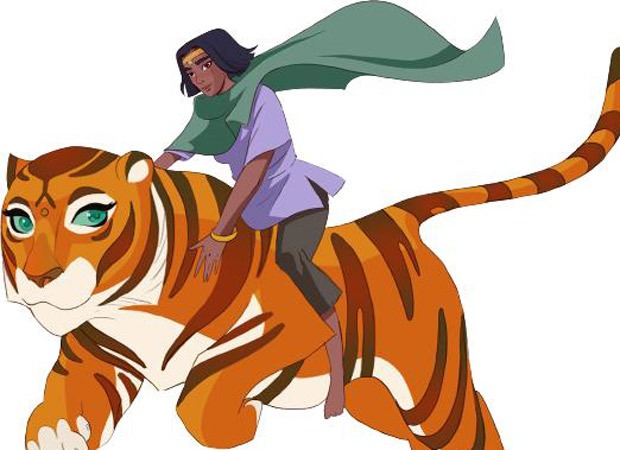 Released as an augmented reality comic book, the installment is paired with an animated short film featuring the voices of feminist leaders from the U.S. and India, including icon Vidya Balan, Rosanna Arquette, Mrunal Thakur, and Sairah Kabir.

Named a ‘gender equality champion’ by UN Women, the series was created by U.S.-based media house Rattapallax founder, documentary filmmaker, and technologist Ram Devineni. ‘Priya’s Mask’ is produced by Tanvi Gandhi, Indrani Ray, and Monika Samtani, written by Shubhra Prakash, with illustrations and animation by Syd Fini, Hamid Bahrami and Neda Kazemifar. The project was funded through a grant from the North India Office (NIO) of U.S. Embassy New Delhi, in coordination with the Regional English Language Office (RELO), as part of U.S.-India cooperation to combat the COVID-19 pandemic.

In an unprecedented and historic collaboration, the installment will present a debut alliance between two hugely successful female comic book superheroes from neighboring countries, with Priya collaborating with Pakistan’s female superhero, Burka Avenger in their fight against the deadly virus. “The virus does not understand or respect borders,” adds writer Shubhra Prakash, “so this was a natural synergy between both cultural heroes.”

Voiced by Mrunal Thakur, Priya will be remodelled for the very first time, shedding away from her former salwar-kameez clad avatar and embracing a feisty teenage demeanour seen in young women around the world. Preserving the time-honoured tradition, she will be escorted by the flying tiger, Sahas voiced by Vidya Balan. Set against the rustic backdrop of Jodhpur, the narrative weaves around the escapades of an 8-year-old Meena voiced by Sairah Kabir and her working mother who nurses COVID-19 infected patients and their cumulative sacrifices.

The India-born U.S.-based Ram Devineni, whose childhood memories largely consist of reading Amar Chitra Katha comic books, says, “It was important to understand the emotional toll the pandemic and isolation has on young people, and provide a message of hope in the comic and film.” Devineni adds that false information around the virus is creating an atmosphere of fear and speculation among citizens, making it harder to focus on the facts to fight the pandemic.

Mrunal Thakur states, “As an avid comic book lover, I resonated strongly with Priya’s superhero character and realised she is someone I would like to bring to life through the creative medium. I have always aspired to be that superwoman who spreads awareness around social issues and it couldn’t be more exciting than to be a part of an animation character who is the voice of reason. Characters like Priya and Sahas are putting forth the message of how we need the world to become a more inclusive place to live in. I want to tell children of frontline workers that even though their parents aren’t wearing capes, they are heroes in their own ways. They too are saving lives and taking care of the nation. This is the first time I am lending my voice to a character especially to a superhero. Infact my entire contribution was recorded over zoom call whilst I was shooting for Jersey in Dehradun. I really wish Priya grows from strength to strength here on. She has the potential of being more than a mere 92 second video and her voice needs to reach every corner of the globe. Love Sonia helped me in my evolutionary journey as a human and as an actor as it allowed me to empathise more strongly with the miseries of the feminine community. I realised I imbibed the power to positively impact community thinking with my work and that will be a constant endeavour for me.”

Vidya Balan states, “Clearly I have a thing for tigers! Jokes aside though what Priya stands for resonated with me at so many levels and it’s the essence of Sahas that connected with me – her strength, her empathy, her confidence. The animation apart from being a nod to caregivers globally which in itself is wonderful and timely and necessary, carries a strong message of solidarity – so it was an easy yes for me and I’m happy to be part of this wonderful film.”

Sairah Kabir states, “I jumped at this opportunity as I found great merit in being part of it. A lot of kids my age will be able to relate to this story since their parents are working round the clock and juggling between so many responsibilities. In times like these, roles get reversed and children become pillars of strength for their parents by encouraging them to continue doing the praiseworthy work. On a sidenote, it was an enjoyable experience voicing a cartoon as I’ve never done that and it’s one thing ticked off my bucket list.”

The U.S. Embassy’s North India Office said, “This exciting book is both the newest chapter in the Priya series and the latest example of the United States and India working together to confront global health challenges, drawing on the deep talents of both of our peoples.”

The pathbreaking comic book series is available as a free download, and has been acknowledged by over 26 million people worldwide through multiple platforms, books, and exhibitions with over 500,000 downloads and 30,000 printed copies distributed.

Priya was introduced to audiences in 2014, two years after the terrible gang-rape on a bus in New Delhi. The augmented reality comic book has over the years brought to attention issues like rape, acid-attacks, and sex-trafficking. The first volume launched in 2014, ‘Priya’s Shakti’ shattered social stigmas surrounding rape survivors and was funded by the Tribeca Film Institute, Ms. Foundation, and the Ford Foundation. The success of the maiden edition led to the release of the second volume ‘Priya’s Mirror’ which premiered at New York Film Festival in 2016, inspired by the story of Laxmi Agarwal it centered around acid attack survivors and was funded by the World Bank. The ensuing third volume ‘Priya and The Lost Girls’ which premiered in 2019 shed light on the issue of sex trafficking in Southeast Asia.

Basking in the exceptional legacy of being the one of the very few comic books specifically constructed to generate awareness on social perils amongst the youth community, the series has unswervingly offered an empathetic narrative of illuminating attitudes towards gender-based violence, creating empathy and identification with survivors so they can pursue justice without shame leading to emancipation from disabling restrictions imposed by an unempathetic society.